That Thing in Your Ear 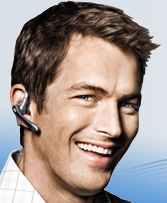 "hey man, what's up?
wait a sec. what the hell is that thing in your ear? do realize that it's blinking obnoxiously? can you even hear what i'm saying?"

wtf? when did it become normal to walk around with some dongle hanging out year earhole? is this herb on the left really that excited about the shit that's stuck to the side of his head? i hope not, because he looks like a moron.

it's like i woke up one day and, suddenly, arrived in bizarro world. everywhere i look, people are sticking these things in their heads and then just leaving them there like nothing ever happened. this shit won't stand. that thing doesn't belong in your head.

i went to the deli yesterday, and Dude sitting next to me is eating his pastrami on rye, talking to his buddy, with one of these doodads sucking his aural canal and blinking at me. as if, all of the sudden, he's going to get THE call; the call to end all calls. and, god forbid his phone might ring three times before he can fish it out of his pocket. Noooooo. when that call comes, he's got to be ready. and by ready, i mean a loser with some bluetooth schbiel surgically implanted onto his face.

another example: at dinner the other night. i'm in a nice restaurant, having a pleasant dining experience, when something begins to catch my eye. yeah, an awkwardly out of place blinking blue light keeps flashing in my peripheral vision. i look over, and some guy is all dressed up, sitting at the table with what appears to be his girlfriend, laughing, joking, holding hands, with his headset in his ear.

this shit is ridiculous. do people think it's cool to look like a robot? maybe it's just that i didn't get the memo and we've all begun to be assimilated and will soon be part of the borg 'collective.' ...fucking borg.

i wonder if these things will ultimately get relegated to the lexicon of tampons. like, will someone eventually leave one of these things in his ear for too long and develop a nasty case of toxic shock syndrome? is the packaging going to start coming with warnings about hygiene and proper maintenance of 'the device' as it pertains to your earhole? is there going to be an o.b. equivalent of the bluetooth earpiece: "designed by an eardoctor to perfectly conform to the curves and contours of your body." then comes the debate over cardboard versus plastic applicators, vending machines in bathrooms, and that ever pesky odor problem. let's not even get into the uncomfortable talks with mom and dad about the new needs of your growing body.

i tell you: this shit has got to stop because it has already gone too far.