Can We Still Rally? 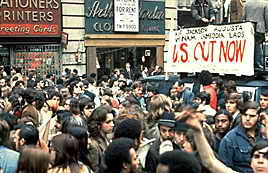 the other night, over dinner with a friend, i believe an important question reared its head:
where has our fervor gone?

why does it appear that the american public is only mildly concerned with the current state of affairs in this country? why is this mild concern meagerly supported by a dearth of examples, further hindering our awareness and leaving efforts hamstrung? and why do these efforts seem sporadic at best?

initially, my friend and i, we gravitated toward the 'media.' between its fragmentation and various vehicles, we simply concluded that its coverage of this war is equally fragmented and varied. and, well, it fills the gaps with things that amount to news-journalism "rubbernecking." we hear about porn revenues, people getting beat up, tv hosts dropping the F Bomb, spats amongst celebrities. and, as interesting and pleasing as these things are to read--they satisfy some cerebral sweet tooth--they take up space in our newspapers, websites, radio shows, magazines, and newscasts. they fill up time that might be better spent examining more necessary issues. moreover, they distract us.

for instance:
there were over 100 people killed in iraq on tuesday. yet, the only thing i really heard about was how hot brangelina looked at the golden globes.

now, i understand that if i really wanted to find some coverage on this disturbing wartime fact, i could dig around for a few minutes and find it. but my worry isn't about a situation like this. there are people who care deeply, and they find the facts; and they do talk about them. but, on the whole, these folks appear (at least to me) to be a vast minority. the issues they try to bring to the forefront can be given cursory coverage in major news sources and compete for ratings on tv newscasts where people naturally gravitate towards less taxing issues, like red carpet fashions.

even still, i think many might agree that there is sufficient coverage of some of the more pressing matters concerning our involvement in this war, and that one need only take a step in any direction to land on it. i admit that it would be difficult for me to argue against this position for an extended period of time.

and so, this situation, this 'mild concern' that i'm discussing, is a cause for even greater perplexity (again, perhaps just for me)...

...if i acquiesce and concede that there may in fact be satisfactory coverage of our involvement in this war and the issues involved in it, how is it that americans still appear to be, on the whole, rather apathetic about the whole thing?

my friend and i, we continued our debate on this point of contention, trying to lay blame. in doing so, we found our focus tightening. it no longer settled on 'media' as a whole. our aim now trained on what i'll call the 'curators'--the newscasters, editors, producers. for if, out there in the media ether, there exists sufficient wartime analysis to counter my previous assertion, and yet we still remain lethargic in response to the facts, then it must be concluded that one cannot necessarily depend on the american people to actively seek out the truth and debate it. therefore, it takes someone to direct us, to literally make us look at what is most important. this job lies in the hands of these 'curators,' as they control the distribution, the lineup, the commentary; they are the sources of dissemination.

there was a time when curators dealt the truth whether we wanted to hear it or not. and because those views rang true, we had no choice but to hear. they forced us to pay attention. during his coverage of the vietnam war, walter cronkite was brave enough to make us stop and listen. during his newscast on february 19, 1968 he opined that the war had become a "stalemate" that had to be ended, and so we must "negotiate."

ultimately, his comments helped lead our country out of that war, perhaps contributing to president johnson's decision to end our commitment in vietnam.

meanwhile, today, we have nbc newscasters labeling the situation in iraq as "civil war."

i find this to be a sad, stark contrast. and, unfortunately, most people are suffering for it--iraqis and americans alike. it's a "civil war" mentality that allows the importance of our wartime status to sneak past the american conscience and become a demoted, second-tier issue, effecting everything related to it.

in the end, however, i think it's difficult to place onus on any one group or person or thing. but then, this isn't the sort of issue that is bettered as result of allocating blame. rather than try to figure out where the problem started, it's better for us to decide how to fix it.

and so, i want to test the waters. i'm posting this article on digg.com. i urge you to help make this post stand out from the rest. i want to use it as a starting point. if enough support can be rallied, i hope to use it as a means of organizing a march in washington d.c.. something large enough to get everyone's attention. i've never done anything like this before, that's why i hope you'll take me seriously and help show that people still do care.

SUCCESS STARTS TODAY!! you can earn more than 5000 dollars a week makingso so easy visit here