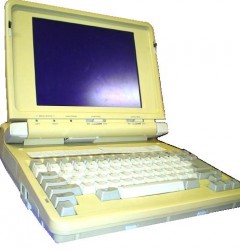 my computer is smelly.

i have an old computer. it's a laptop. sometimes i lug it with me places like the coffee shop or the deli or maybe somehwere else too. the outside of my smellbox is festooned with stickers ...but not flowery stickers, as "festoon" might have suggested to some. nope. they're just random stickers.

they were stuck there with the intention of infecting the smellbox with some character. we do that with our cars. when they get old, these automobiles (not 'cars'; cars are new) get little additions. they start to grow fuzzy dice or hula girls or furry steering wheels. and, you see bumper stickers that say "how's my driving?" or "my other car's a mazerati." and, then the car is named "steve-o" or "betty" or "kiki." somehow, the total sum of these attributes meets the minimum threshold of what we consider a personality because, as the clock winds down, we start to say things like, "kiki sure is fiesty, but she's been good to me" or "steve-o, he hangs in tough. he's a scrapper; that's why i like him." and so it goes.

i thought i could manage the same fate for my sharp-cornered laptop by stickering it. but, as its name is smellbox, it's pretty clear that the stickers didn't really do much for its character. they've been far outshined by smelliness. my laptop is that ugly, smelly kid that always grossed you out in gym class ...but, now, with the stickers, he's got an extreme case of acne.

icing on the cake.

my funky laptop is a people-repellant. it's the funk that does it; i'm pretty sure. i go somewhere with my smellbox, and i open it up and turn it on. it takes one to two minutes for the armpit-smell to waft up from beneath the keyboard. if you could see it, i think it would look like that stink-ribbon that always trailed skunks in old cartoons. 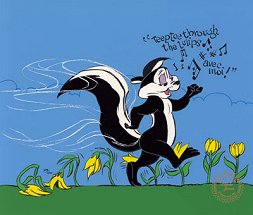 it's only a matter of time before that ribbon winds its way beneath elmer fudd's nose.

we all know what happens next:

can't shoot my smellbox though. i need it. to write this.

is it bad that i'm talking about it right now? i wonder if it can tell. maybe it will get back at me. like when that crazy computer started to eat richard pryor in superman 3. that would suck.

it's just me and my smellbox. everytime i sit down with it, people start to leave. i think the girl sitting next to me is talking about it right now. she's speaking russian, but sometimes she'll turn her head to look at me during her phone conversation and say some words in english, like "smelly" and "hairy" and "guy" and "computer."

i'm at work and now the girl in the other cubicle thinks i'm crazy because i was laughing out loud at your post about the poor fragrance-challenged little mac guy.